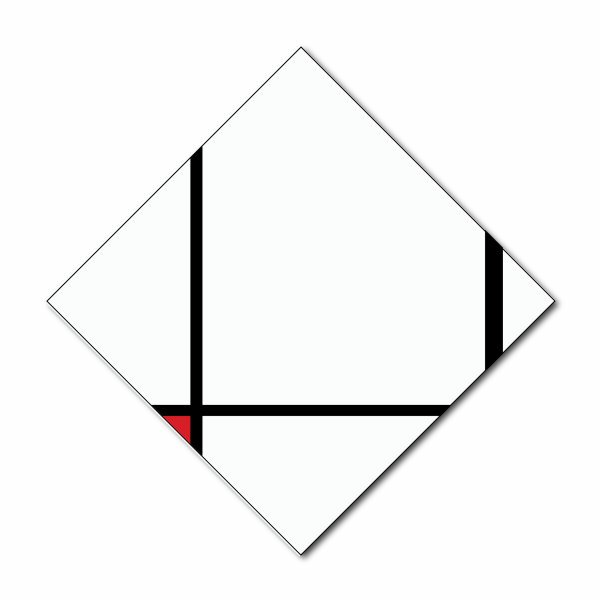 This article updates the one already published on 23 May 2018. A further step in the long path of reconstruction of one of Mondrian’s disappeared works: (B169) KOMPOSITION I: Lozenge with Three Lines, 1926.
The hypothesis developed with the Study of Reconstruction, MONDRIAN – The Disappeared Paintings, analyzes the possibility that this work has been modified to replace another work that Mondrian created in 1931 for the City of Hilversum. The work, as amended, is currently at the Stedelijk Museum in Amsterdam with the title (B229) Lozenge Composition with Two Lines.
The following paragraph is transcribed from the aforementioned Study of Reconstruction.

On 28 May 2018, a communication was received from the Stedelijk Museum, with which the complete document is transmitted.
What you thought could reveal important elements does not really add anything new.
The previous image, “cut” in the final part, showed that something was written on the Mondrian document. In fact it turns out, but it is not something written by Mondrian, but an annotation added by someone else.
In Dutch: “Dit gaf Mondriaan bij het schilderij”
Translated: “Mondriaan give this togheter with the painting”
Below is the complete image. 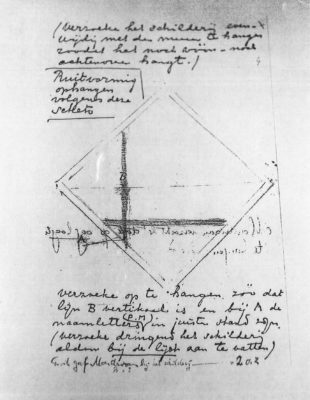 Therefore, no other important data appear, such as the size of the work.
The only thing that could be proved is that the signature is in the right place.
There remain, now, many other questions and doubts to which we must try to give answers.
Ultimately, what we are trying to implement is a kind of reverse path. That is to say, starting from the assertion (even if theorized) that B169 and B229 are the same canvas and find the answers to prove the opposite.
However, the reasons that lead to the hypothesis that it is the same work, are many. Dictated above all by a long series of doubts that emerged during the historical reconstruction phase. Doubts that we try to summarize.

Two identical works
In all the Mondrian production of the abstract period (over 400 works), there are no two works that are so perfectly overlapping. You can find works that are very similar but not “identical”. This is a fundamental fact, as it does not reflect his style and his personality.
Looking at the following image, one can see how perfect correspondence exists between the two works, including the famous “third line” taken with the X-ray examination.
Therefore the first question arose: is it possible that it is the same canvas? 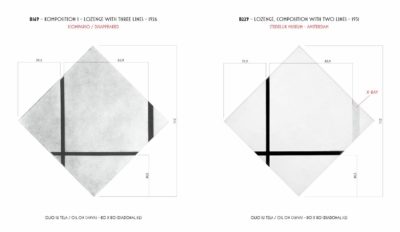 Analysis of the production of Mondrian in the second period of Paris, in relation to the disappeared works
With the chapter in “Appendix“, we have seen how the painting B169, falls within the group of works that disappeared immediately after the exhibition “Der Stuhl” in Frankfurt in 1929. This moment is extremely decisive and significant, in which a large number of works “Disappear” for a long time, then “miraculously” reappear at a distance of 15-20 years in different locations.
In a scenario like the one shown in the chapter in “Appendix” (displayed in the “Diagram” contained in the separate supplement), it could be extremely simple to retrieve the work B169 and use its canvas to modify it and replace the work B229 that Mondrian created for Hilversum.

Let’s now look at the path of these two works.

He sells it to the Kunstausstellung Kühl Gallery in Dresden.

After a similar exhibition made with other works sold at the same Gallery, B169 also participates in the famous “Der Stuhl” exhibition in Frankfurt in 1929. From this moment on “disappears”.

In January 1931, an image of the work was published in the journal “Cahiers d’Art”.

The photo of the work, as indicated by Carmean in his book “Mondrian – The Diamond Compositions”, belongs to a Private Collection (perhaps located in the Archive of Sal Slijper at the Gemeentemuseum The Hague).

B229 – from 1931 to 1946
Between the end of 1930 and the first half of 1931, the Association of Dutch Artists (Nederlandsch Kunstverbond) decided to purchase a work by Mondrian to donate it to the City of Hilversum.

In the summer of 1931, Arch. Dudok, representing the City of Hilversum, goes to Paris at the studio of Mondrian and chooses a “lozenge shaped” work.

In the fall of 1931, Mondrian finished the work and sent it to Hilversum, attaching the note with instructions to hang it. As seen in the previous image, it is a diamond-shaped painting containing two lines, but the dimensions are not indicated.

In 1946 (two years after the death of Mondrian), the work appears for the first time in public, in the exhibition dedicated to the artist at the Stedelijk Museum in Amsterdam. The work is listed at position 111 with the title “composition” with black lines (“compositie” met zwarte lijnen). There are no images that depict the work during this exhibition.

The first publication where the work appears, is the first complete catalog of Mondrian, edited by Michel Seuphor of 1956, where the painting is reproduced on page 288 with the title “Composition with Two Lines”.

Now a first question arises: since it is a highly representative work for the City of Hilversum, is it possible that in the whole period between 1931 and 1946 it was never photographed? (remember that in these 15 years the work has remained at the studio of the architect Dudok).

In January 2011, in the journal “ZKK – Journal for Art Technology and Conservation”, the restoration report was published, in which a series of rather significant data appear: the report on the state of conservation of the work, from which it results a “hypothetical” previous restoration; the X-ray examination in which a “third line” appears. 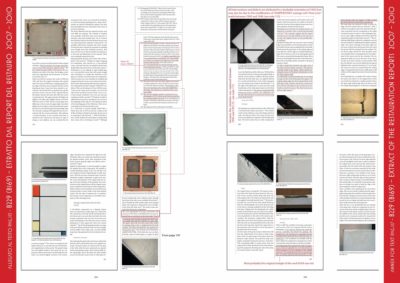 “Hypothetical” previous restoration
Regarding the state of conservation of the work, a series of significant interventions performed on the work B229 are listed, ranging from the replacement of the stretcher, to applications of a further coat of color of the white background, up to the increase in the thickness of the horizontal line , and so on.
All the interventions listed are precisely those that had to be performed to modify B169 and replace B229.
Instead, in note 113 of the 2007/10 restoration report, these interventions are attributed to a “previous restoration”, of which, however, there is no document! Restoration placed in a period that can go from 1945 to 1951, or from 1951 to 1955, adding that in a 1951/52 photo it is clear that the canvas has been “restored” (see image below). In short, the temporal collocation of this “hypothetical restoration” is rather vague. 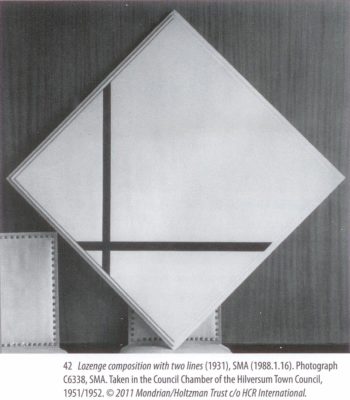 Now the first question to be asked is the following: how is it possible that the work after a few years needed a restoration? (we always remember that it was kept at the studio of the architect Dudok and that the City of Hilversum was not affected by war events of the Second World War).
And if restoration is concerned, what serious damage would the work have undergone by even involving the replacement of the stretcher and interventions on the entire surface of the canvas?
In addition, the previous image dates back to 1951/52 taken at the “Council Chamber” of the “Hilversum Town Council”, meanwhile, however, the work had already been exhibited for the first time in the exhibition dedicated to Mondrian in 1946 (from 6 November to 12 December) at the Stedelijk Museum. Is it possible that there is no photograph of this exhibition portraying the work B229?
According to what was stated, on the other hand, during this exhibition the work had been restored in a very short time. Or it must still have been in its original “conditions”, if “the hypothetical restoration” was carried out between 1947 and 1955.

X-ray examination and the “third line”
In the same report of the 2007/10 restoration, an image related to an X-ray examination is also published, probably performed in 1979 (note 115 of the report).
A first consideration immediately emerges here.
It seems obvious that someone had already hypothesized that the canvas of B229 could contain a “third line”, that is to say it could be the canvas of B169! Otherwise why do you do an X-ray at that precise point?
Then, the presence of the “third line” is justified as an “intention” of Mondrian, but that in practice did not had paint it. In addition to this, in the previous Stedelijk Museum communication of 18 May 2018, the following is also stated: […] “The only thing that the X-ray of B 229 does reveal, is an aperture, which may appear as a line but is in fact an interruption in a layer of white paint” […]
So if the line has not been executed, why does the X-ray test detect a dark surface? TTechnically it should be impossible! On the other hand, if it were only an “aperture” of the white paint layer, a difference in thickness of the color layer should be visible on the outer surface of the canvas. Instead, a perfectly flat surface appears.
So, if the line has not been created and the whole surface is white, you should not see any trace. Therefore, why deny that the line was made and then canceled? (pleonastic question!).
On page 125-E, a technical explanation has been presented showing that the “third line” has certainly been realized and then canceled.

Conclusion
So far the main doubts have been exposed to the most important questions, which show that what is theorized is absolutely plausible. Other details are shown in the previous pages and along the entire path of historical reconstruction of the work B169.
It is further reiterated that the will is not to want to prove at all costs that the work B169 was used to replace the work B229. There are, however, a series of serious doubts that push towards this possibility, for which it is hoped to find exhaustive answers. 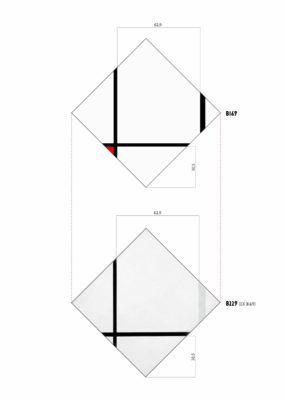 B169 - B229 NEW RECONSTRUCTION AND FURTHER EVALUATIONS 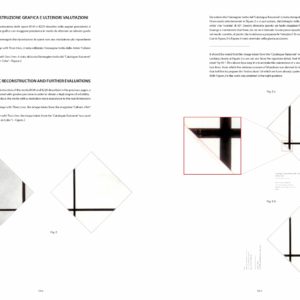 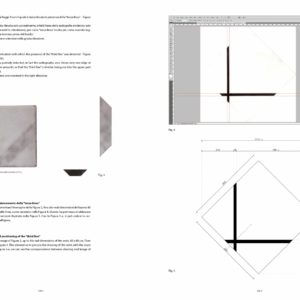 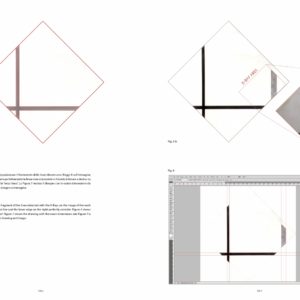 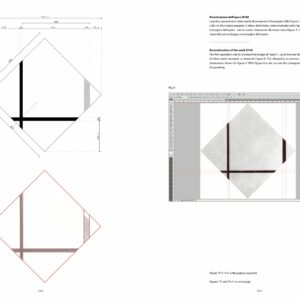 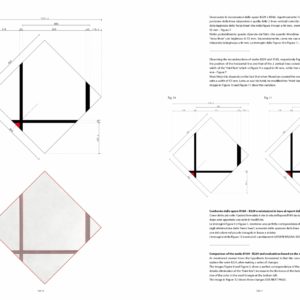 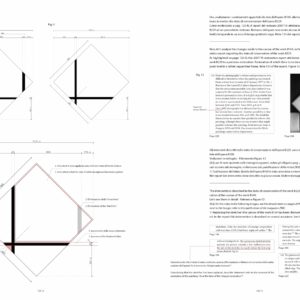 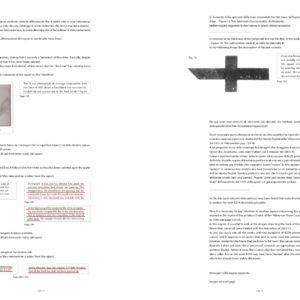 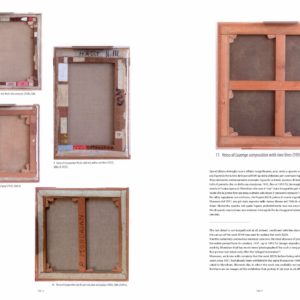