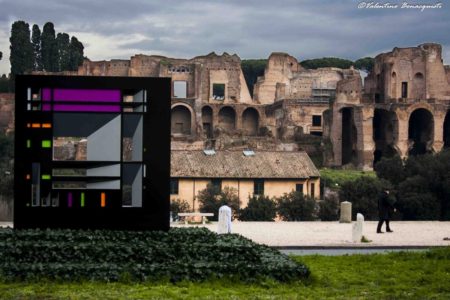 Three weeks have already gone by since that fateful 28th January, a day in which after I had handed in to the authority a self-accusation, bringing to an end the performance at Circus Maximus which started on the night of the 24th November 2013. During this period of time many people have spoken about the happening using different keys of interpretation.  In many cases correctly but in many others unfortunately the news had been mystified and exploited, therefore I feel the necessity to make my point of view clear and put everything back into line.

The main reason for my reaction, in fact has been ignored, misunderstood or kept silent.

For those who know my work and my project “Inside Mondriaan” will also know how to reconnect the Monolith to my research, nevertheless I still need to underline in a categorical manner, that my intent was surely not  an abusive and cunning way to exhibit an opera in a public contest in order to gain publicity. The Media who stated this have misinterpreted the meaning of what happened in a superficial and incorrect manner.

The “Monolith” situated in that precise place, wasn’t an exposition of itself but represented the exposition of a “symbol”, which together with the action of an abusive occupation and an act of irreverence (which must be underlined – without any consequence of vandalism) I aimed to expose this objection:

Unfortunately due to superficiality of lack of listening or probably tendentiously to hide moral laxity of our institutions many headlines wanted to make the procedure look as if it was a way to self-promote, and in some occasions I have been criticized on personal matters as well as artistic ones. Even the critical opinion which has only to do with the opera, either they be positive or negative are out of place. Is it so very difficult to understand that to stop only on a superficial aesthetical and artistic adjudgement of the opera has hardly anything to do with what it represents and on the conceptual meaning of my procedure?

The success on the whole happening has been the duration of these two months, in which  “Place de la Concorde” remained at Circus Maximus in front of  entire indifference of the Institution which wasn’t able to defend the city but moreover had not even noticed my “invasion” until the day in which I decided to bring it to an end,  making a self-accusation.

All of which that has followed is nothing more than a perfect  representation of “The Cave myth of Plato”.

I therefore realize that I “probably” have fought uselessly for an ideal, a reality which is uncomfortable to digest.

Mine was a utopian dream. Anyway at least I reacted, I did something. I accomplished an act of love for this city – showing my face and exposing myself in first person. Also, nearly impoverishing myself and yet I am not regretful. Even though, now I realize, it’s impossible to believe that one can react for an ideal… but this is so!