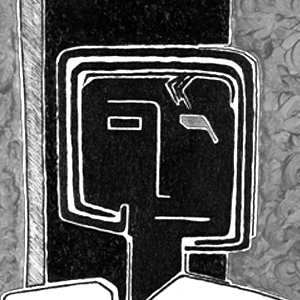 Francesco Visalli is a self-taught artist. He took up painting at a late age, after gaining a wide variety of experience in a life rich in encounters and events that significantly marked his inner growth.

A passion for drawing throughout his career as an architect motivated him to take up art and follow a new road which appeared to him out of the blue, like a revelation. At the age of fifty, during a particularly troubled time of his life, Visalli started to draw unremittingly day and night, as if his mind had long been bursting with images seeking to manifest themselves in a way that only the hand of the artist could allow. It took just a few weeks for these initial drawing experiences to become paintings, immediately revealing a personal style which, in spite of his admission to being self-taught, could certainly not be called naive because of the complexity and mysterious beauty that characterises his work.

Visalli has not studied the great masters of art, and nor does he intend to as he does not wish to be influenced. His fervent imagination cannot be confined to a category with rules too narrow to  allow him to profess the freedom of expression he so craves.

The artist does not care to be put in a box, to be valuated or collected: he wants to relate with honesty what comes to life in his mind, as if in a never-ending daydream.

It is just this that first strikes you about Visalli’s paintings: an exquisitely dreamlike dimension that makes you wonder how it came about. Is he portraying a dream, an interpretation of feelings or a vision? There are probably elements of all these worlds in his paintings, making them mysterious and fascinating in the eyes of the observer.

It is possible to look at his paintings with the innocent eyes of a child, and be lulled by the lines and tones, or analyse them through the filter of adult experience, and recognise states of mind and experiences that form many a life.

Visalli’s paintings are structurally very complex and rich in detail and signs that make up a rich tapestry and seem to simultaneously tempt and defy interpretation.

He has a varied palette, a real chromatic caleidoscope tinting the known world in intriguing and beguiling tones which, together with the scenes depicted, create new worlds that first seem impossible in terms of equilibrium and resolution and then, after closer scrutiny, seem real and tangible, painted pathways that can be followed with curiosity and caution.

Visalli’s style is personal and effective at conveying its message. The colours never combine but are always kept separate by a thin white line, reminiscent of windows that can be found in Gothic cathedrals where the light meets the surface of the glass to create a suffused atmosphere of magic and suspense. There are no shadows in these paintings, only occasional and subtle chiaroscuro effects that become impalpable intervals within the overall visual context. Despite Visalli’s wish to distance himself from the influence of other artists, there are times when one cannot help notice in his art an element of Picasso or chromatisms typical of the Fauves. Nonetheless, the artist always remains faithful to his own originality.

Some people call Visalli a surrealist. It would probably be more appropriate to call him a visionary artist. His work does not feature descriptions of the absurd or bizarre combinations. He remains within the real world and modifies it and embellishes upon it, extracting certain elements to transpose them into a new dimension. Observing some of his paintings, you get the feeling he suffers from a sort of horror vacui. The picture takes up the entire canvas, creating a sensation akin to vertigo. In reality, these compositions do not just satisfy a need to fill up space, but also consist of counterpoints, visual declarations and cross-references that become the only possible way of representing an infinite world beyond the concepts of time and space and capable of covering several many dimensions and expanding, ideally beyond the confines of the canvas.

It is as if Visalli has the ability to communicate directly and freely with his imagination, a rare gift that, together with his talent, allows him to clearly convey what he sees with his mind’s eye. The equilibriums he creates are fragile and precarious, so we get the impression that the quality of the final composition, associated with a sort of creative whirlwind, is always at risk; and yet, in the end, he manages to recover control of the whole and of its various components, drawing perhaps also on his expertise as a draftsman. In other paintings, the symbolic meaning is more sober and concise, encapsulating a thought or emotion.

What remains constant in the work of this artist is not only a reference to sentiment, but also an intricate set of cultural and literary allusions that somehow make his work universal. Without resorting to unnecessary rhetoric, Visalli conveys to the observer a spectrum of experiences, emotions and thoughts that are not purely individually subjective but which, by being based on firm Jungian archetypes, bring the artist and observer together in an exchange and communication rich in meaning. He becomes a sort of winged messenger who can tell us about our daily foibles, the bitter side of life, the craved solitude, the immense melancholy and the petty materialism we have all encountered one time or another along the way.

His work does not express moral judgment, but rather a warning, conveyed with the empathy of someone who knows how to draw the lines around darkness because he has experienced it all too well but has come out victorious. This is why in other paintings we can find strongly positive messages full of hope and desires that wait to be attained by anyone with the courage to try, and can keep alive the dialogue with the self.

These ideas are essential to understand the work of this visionary artist who, in the course of his work, proposes a genuine interpretation of the intrinsic meaning of life.

It is perhaps due to this instinctive striving for other horizons that his paintings often feature the figure of the horse, a figure synonymous with freedom and travel, symbol of beauty and noble values, and as redeeming as love; primarily the spiritual love that guides the wise hand and intelligent heart that belongs to his art.