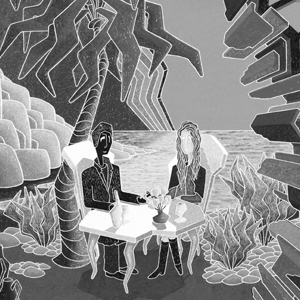 «I do not know where this space inside me comes from»
Wislawa Szymborska: A Large Number, 1976

I return to writing about the work of Francesco Visalli on the occasion of an exhibition illustrating a decisive point in the career of this appreciated painter. The venue for the event, the prestigious Bramante Cloister in Rome, is itself important, but so is the actual content of the work chosen for display: his entire artistic production from the end of 2009 to the present day.

In fact, what some may regard as a marginal interlude is a highly significant period in his career. In about two years of feverish activity, including times of happiness, crisis, and anxiety, Visalli has barely produced twenty paintings, of an ever-increasing size.

In the current creative climate, characterized by the prolific production required to satisfy the insatiable market demands, Visalli stands out as an artist who is clearly uninterested in following such trends. The results of Visalli’s flourishing creativity relate to a deep internal urge: to explore, among the dilemmas rooted in his soul, the alluring and impenetrable mysteries of painting.

Thus, painting becomes for him a sort of psychoanalytical exercise located in that subtle area of the memory where life deposits a mass of salutary detritus. There is the pervasive storyline, sometimes inherent in images that evoke the familiar (Tavern, The Wedding, Regret and Hope, Breakfast at Tiffany’s: numbers 1, 2, 3, and 6 in the catalogue). These are situations close to everyone’s daily life: such as the sense of solitude that overwhelms us when eating a solitary meal in a restaurant, or sitting alone on a bench in the open air. Nevertheless, there is a persistent idea of meditation, which is also a basic element for Visalli: he uses it to clarify his own thoughts, or to find, within his own inner kaleidoscope of ideas, the fertile seeds of impending creation.

He principally represents events in which he is covertly involved: even using strange forms of personification, in the manner of Giorgio de Chirico. This is clearly evidenced in some of his contemplative works (Literate Musician, Wandering Poet: numbers 4 and 5). However, these are essentially the backdrop for Visalli’s memories of places he has visited during his many travels (Landscape 1 – The Village, Remembrances: numbers 7 and 8). He whispers us nostalgic stories of adventure, of far-off dangers, and of a whole range of emotions, from suffering to joy, now transformed into useful pretexts for storytelling.

Life, experience, and the passage of time have all helped to develop Visalli’s sensitivity, mitigating the inner friction which sometimes shattered his most exposed nerves. The past suddenly re-emerges in the sibylline image of a woman in whom a hundred others can be distinguished (Duplicity, She, She, Her, She who: numbers 9, 10, 11, 12, and 13). This enigmatic presence crops up obsessively in a strange network of creativity, which with its subtle gradations and clarity of colour, demonstrates the considerable aptitude of the artist. We are never permitted to know, of course, who “she” really is, and so we experience a feeling analogous to that we experience in the presence of Leonardo’s “Giaconda”: the strange emotional mirroring of the artist and his subject (Kindred Soul (no. 18), Infinite Love Story (no. 20)? The mental construct of an «alternative reality» created by Visalli’s inspired imagination.

In this way, his Visions (numbers. 14, 15, and 16) have been conceived and created. They are like states of mind converging together and spreading a fascinating, dreamlike atmosphere populated by myths and archetypal figures. Forests of Symbols1 – as Baudelaire would have said –, in which anthropomorphic forms, like the Moai found on Easter Island, exist in some parallel reality.

An incredible stillness prevails in silent regions which seem to belong to a lunar landscape, as if Visalli´s aim had been to contain, in one highly imaginative volume of work, all the individual events of a long history, reread, now, in the allegorical structure of a mosaic, whose individual broken pieces suggest unanswered questions and insuperable obstacles. More than this: there are the reverberations of broken feelings inside a reflection filled with whatever now remains of shattered illusions and distant spells (Pan d’Oro, Madame Quixote’s Dawn: numbers 17 and 19). Suddenly, a tragic element intervenes in the work, taken from the verses of Wislawa Szymborska, The Suicide’s Room (no. 21):

I’ll bet you think the room was empty.
Wrong. There were three chairs with sturdy backs.
A lamp, good for fighting the dark.
A desk, and on the desk a wallet, some newspapers². […]

An intellectual friend killed himself without leaving any sort of note behind: in the room there remains his personal objects to speak about him. The metaphysics of things: Visalli interprets their ancestral spirit and, at the same time, the eternal world, drawing inspiration from the mournful lyrical tale of a female poet who tends, like Leopardi, towards cosmic pessimism:

In the face of such chaos, which has also become cosmic (no. 22), it might be useful and even salutary to put everything into one big Suitcase (no. 23). Let’s pack into it the city, the countries, the people, and then all the animals, the rivers and the trees, the sight of which has filled us with amazement or with melancholy; the palpitations which have started or stopped our hearts; the hopes that have survived until the abyss of truth or desperation. And let us leave. For a journey – real or imaginary, it doesn’t matter – which should have, like these intriguing pictures by Visalli, a single command behind it: the ancient saying carved into the architrave of the portal at the Temple of Delphi: Gnōthi seautón (Know Thyself)[1]