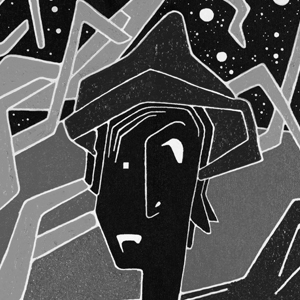 The wandering poet, in the wind with hat and scarf, reminiscent of the atmospheres and spells of Fellini. Knights, convinced in the battle against their fantasies, ready to fight against the windmills of tradition and everyday life. And treasure islands that are home to giants of stone, as if they were the shadows of ancient ghosts or monumental Moai eager to reveal the secret that they jealously guard in the stone. These are the fairy tale characters in the paintings by Francesco Visalli, figures based on the concreteness of real stories who observe, however, with the eyes of the deluded. Dichotomous natures, architectural superstructures – where the brick is colour, brush the floor plan – divided between the possibility of replacing the concrete horizon and that of directing the fantastic which enshrouds it, in a game of interpenetration leading to the construction of a third State, not political but creative, nourished by the blood of mental fantasies under stress, bent to the need of the subject to be able to say “true”. And credible. 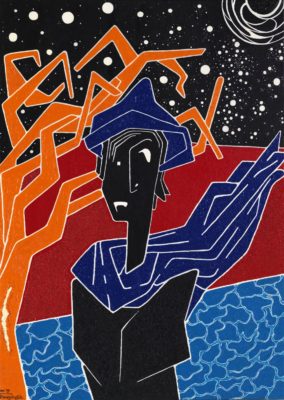 The coast becomes the shore of hopes raised or entrusted to the waves, which begin and always return to the soul-island that created them. In this context, the spirit fragments and makes secret and guards the stone and its sculptor, perennial “source” of an aesthetic that is, above all, philosophy. Thus, in the silence of abandoned colours and naive cosmic constructions, the knight wanders in search of points that are, in reality, anchors clinging to the madness of existence. Don Quixote becomes a woman, fragile as the illuminating dawn, ready to adapt to any change, denying any limit, even the literary one that inspires it, turning an energetic man into a tearful woman. It is the dual nature of the Creator, raised and crushed at once in the awareness of a talent that is voice, hand and eye.