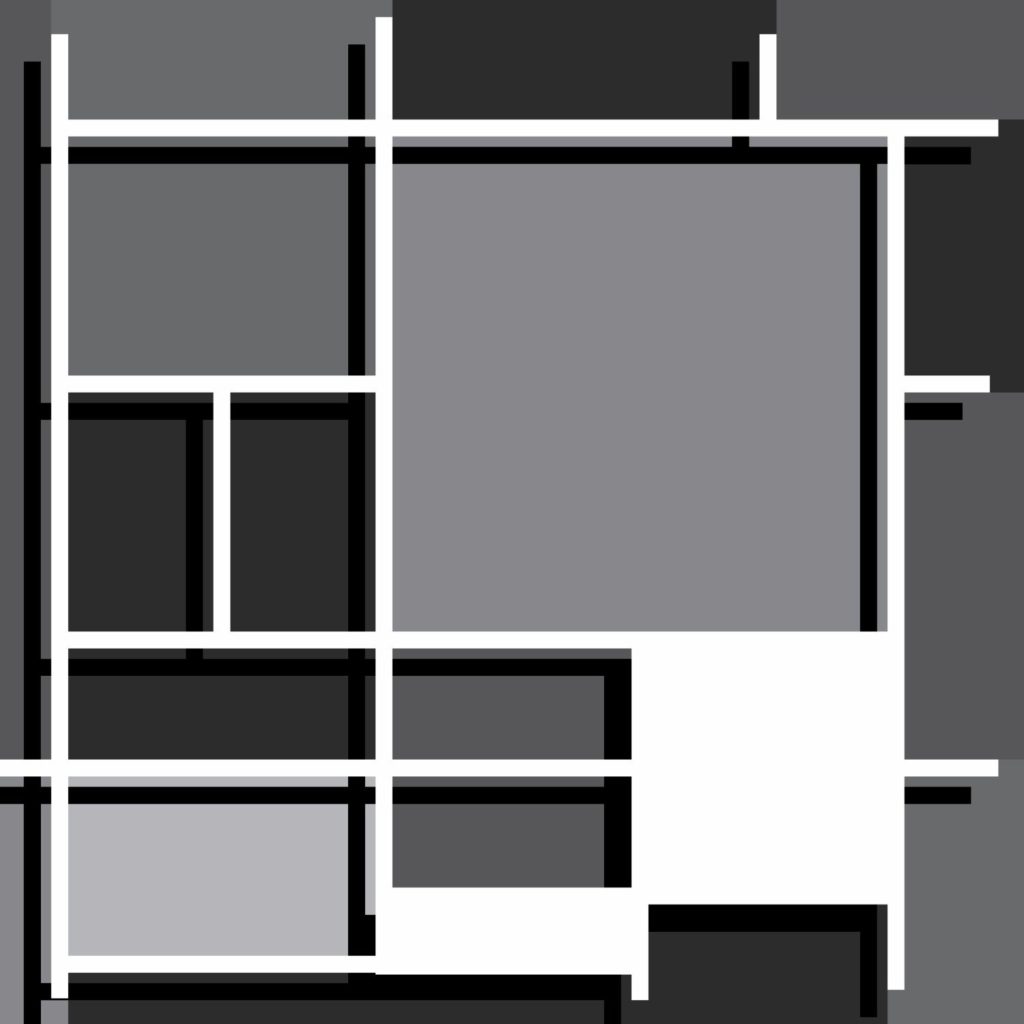 In 2011, Francesco Visalli saw a retrospective of Piet Mondrian (Pieter Cornelis Mondriaan) at the Vittoriano in Rome and was struck by title “The perfect harmony”. Actually, he found in the whole show – and in general in all the pieces by the Dutch master – a remarkably simple and yet revolutionary perfection of forms, balances, colors as well as the equilibrium in the relationship between solids and voids . From this sudden fascination was born the project “Inside Mondriaan”, a conceptual research.

Mainly, it is a theoretical and technical study in which Visalli takes into account a corpus of 47 selected Mondrian’s paintings belonging to his abstract period, therefore made between 1917 and 1944. Through a series of variations on the theme, intended to enter into the dynamics of the construction of those specific works, he comes to the development of 340 “visitations”. In a first stage, they exist only in digital form with the intention to materialize them in real paintings and then shift on a three-dimensional plane of exponential sizes, from the sculptural model to the   monolithic installation up to architecture. The project can also be applied to the design, but still considering that the all the infinite, different applications of realization are secondary to the genuine intent of the project, which aims to study  Mondrian’s spatial and chromatic dynamics and the compositional grammars of the De Stijl movement applied to a contemporary dimension.

The two starting points of “Inside Mondrian” were the understanding of Mondrian’s gradual addressing towards a simplification of his work, seeking harmony in essentiality, and the comprehension of the main rule of his most mature and balanced pieces: the grid made by black straight lines, both horizontal and vertical, which create spatial planes, empty or filled exclusively by the three primary colors (yellow, red and blue). Francesco Visalli’s actions go in the direction of exploring this purity, creating works that re-experience in reverse the path of cleaning obtained by Mondrian. Through chromatic inversions, distortions, stratifications and shades of color, he imagines the negative face of each artwork and tries to go back in its hypothetical history, retracing in reverse the simplification obtained by Mondrian and looking for the “formulas” of his perfect and basic compositions with an eye almost alchemical and mathematical.

The study starts from the basic artwork that Visalli calls “00”, which is the same seen during the Mondrian’s retrospective in Rome and from which springs the whole idea of the project: “Composition with large red plane, yellow, black, gray and blue” – 1921. This is the first image he digitally reworks, the first of 47 works analyzed through a set of specific actions: exploring, studying, penetrating, inverting, distorting, transforming. Each work is, firstly, enlarged with elaborations conceived doubling its original size and, secondly, split into its two main components: color planes and geometric pattern.

At this point, the operations performed to create the variations of each work follow a precise process in nine steps.

It’s from this point that any further evolution – or involution – necessarily abandons the pictorial side and meets its three-dimensional aspect. This stops being a pure visual impression given by the shadows and takes shape in real sculptural objects or even in architectural designs. Visalli indeed duplicates the dimensions of these bodies up to imagine a hypothetical city built with the laws of the De Stijl movement, a city such as might have existed in Mondrian’s visionarity, which could have been his ideal model to be portrayed in subsequent steps, more and more simplified until reaching a disarming and perfect fundamental solution.

Through the project “Inside Mondriaan”, therefore, Francesco Visalli’s intention is to rebuild this solution backwards, retracing Mondrian footsteps with a route proposal, trying to theorically recreate his cleaning process, rationalizing and putting into equation the harmony achieved by the analyzed artworks.