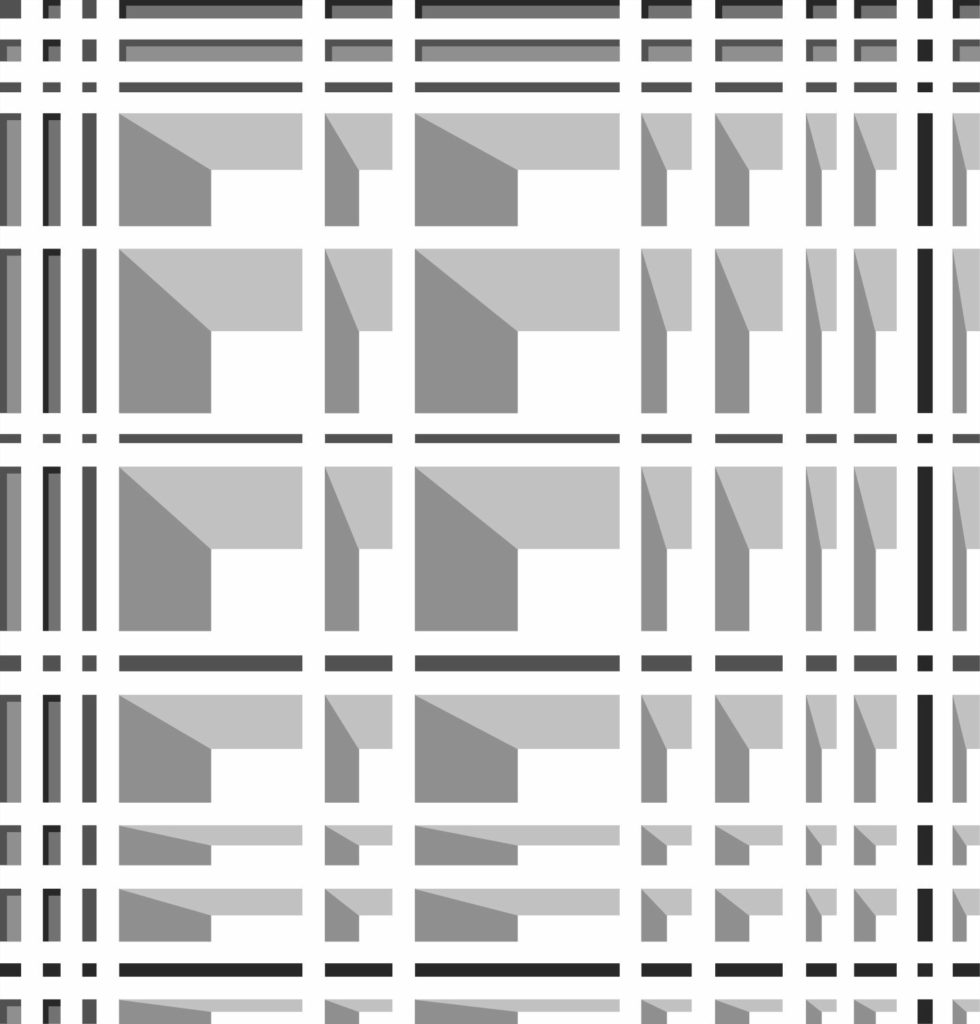 The world may not be perfect,

yet the perfection exists, and comes in

simple forms, not at all showy.

The project “Inside Mondriaan” is only partially a painting project. Its conceptual purpose is, indeed, to analyse in depth the reading levels of a work which is apparently one of the most simple and basic of art history. Francesco Visalli has pushed this research up to create from the painting a prototype of its subject of reference through a three-dimensionality which is no longer just a mere effect on the canvas obtained by shadows and perspective planes, but that becomes real sculpture. It takes shape in the space, becomes a physical, solid, explorable body. In this way, Visalli makes a breakthrough not only in his own visitation of the Mondrian’s work, but also in all those  researches developed in the twentieth century in which the non-figurative art surpassed the concept of representation in order to explore the conceptual relationship between sign and world. This opened the question of the space, of an art that wanted to build its own vision through the rebellion of its purely aesthetic role in order to reach the level of the abstract thinking. Artworks both refined and simple (starting from the black square by Kazimir Severinovič Malevič up to the Spatialist experiences by Lucio Fontana) each in its own way, declared the need of art to go beyond the surface where they took place. 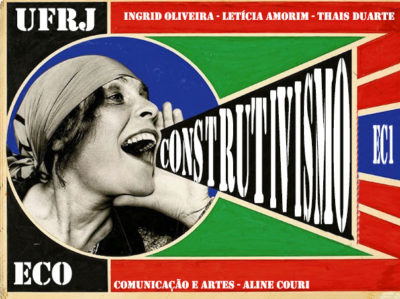 So, when the Russian artist Tatlin met Picasso, he realized that from the cubist painting one could abstract geometric structures to be proposed in real space, reshaping the world. And after that, he theorized the “constructivism”, according to which art had to oppose against the old bourgeois categories and permeate the entire environment and the whole society by developing a middle ground between architecture and painting. In 1920, Naum Gabo’s “realistic” manifesto states that “the realization of our perceptions of the world in the forms of space and time, should be the only one purpose of pictorial and plastic arts.” And also the famous cut by Fontana breaks the traditional distinction between painting and sculpture, while remaining essentially two-dimensional: it’s a work through which one can look beyond, but the space is still just a form of perception, an accident, a suggested metaphor. 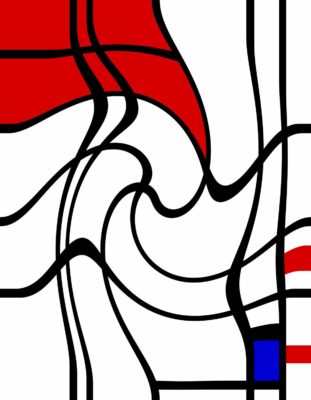 Can artworks conceived by these twentieth century artists, so intent on studying the plan to be able to overcome it, really be taken and passed on to Cartesio’s three-axis system? Can a painting have its third dimension, be “surrounded”, “crossed”, “circumnavigated” as if it were an island that defines the sea of empty and shapeless space wherein is plunged? It’s that what Francesco Visalli was wondering while choosing to do this operation on Piet Mondrian, apparently the most basic and the more playful abstract artist. The one of the black lines and of the primary colors, with his spaces left white as incomplete boxes. He surprisingly claimed to draw inspiration from nature, even creating abstract, totally regular compositions. Indeed, in his disconcerting simplicity, his love for what he called “nature” was a passion for essentiality and harmony, for the intrinsic nature of painting as a special case among the elements of creation. He wanted to report the potentially infinite perfection existing in the minimum element. He sought in the art what that physicists seek within the whole universe: the basic formula, the easiest yet most comprehensive symbol. And as in physics, his pictorial element is “nuclear.” Each one of his paintings has, indeed, lines growing down to the the edges without reach an end, as if outside the frame it could be another framework continuing the previous ad infinitum.

But they remain on the wall. 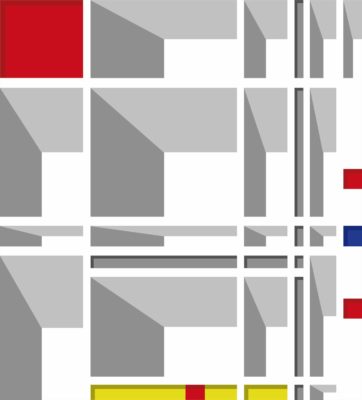 No matter how much unlimited could be one’s imagination, these few lines remain frozen on the surface of their host wall, flowing in binary mode. Francesco Visalli, instead, initially entered in these works bringing an illusory three-dimensional scheme, highlighting the possible plans of the work through shadows, perspective effects, reversals and color distortions and, at a later stage, has exploited his experience as an architect and has ripped the works out from the wall. More precisely, it is as if he had taken the outermost layer of the canvas and he had pulled to the outside extending and expanding it outwardly, so as to produce a torn of the painting from the wall and a concretization from a drawn geometry towards a real body composed of solids and voids, blocks of color and of free space. 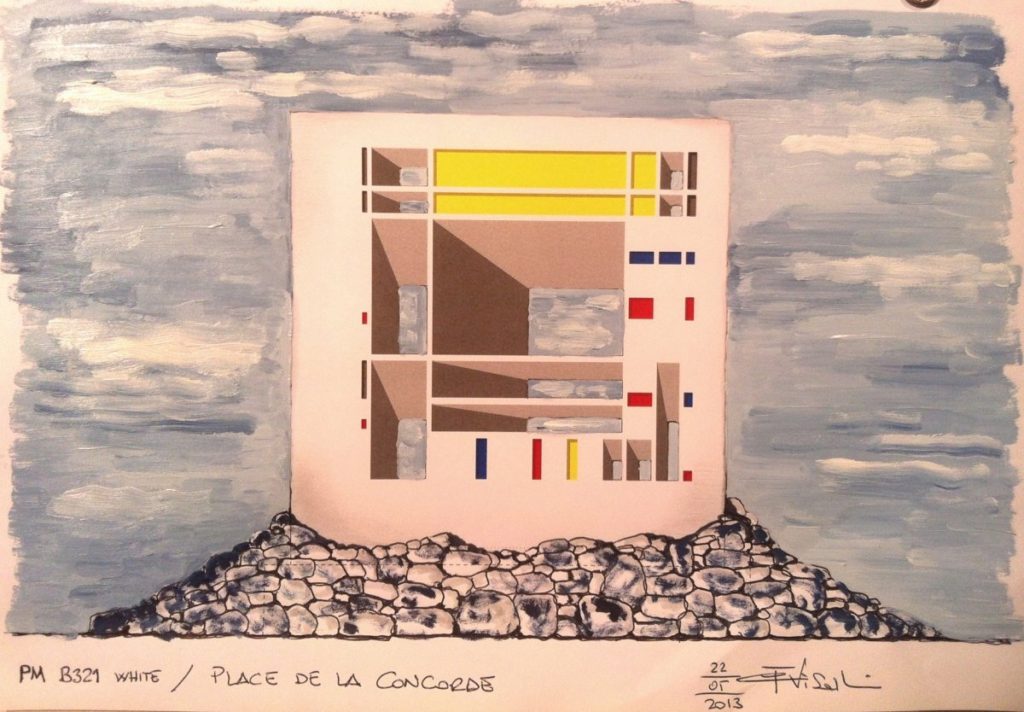 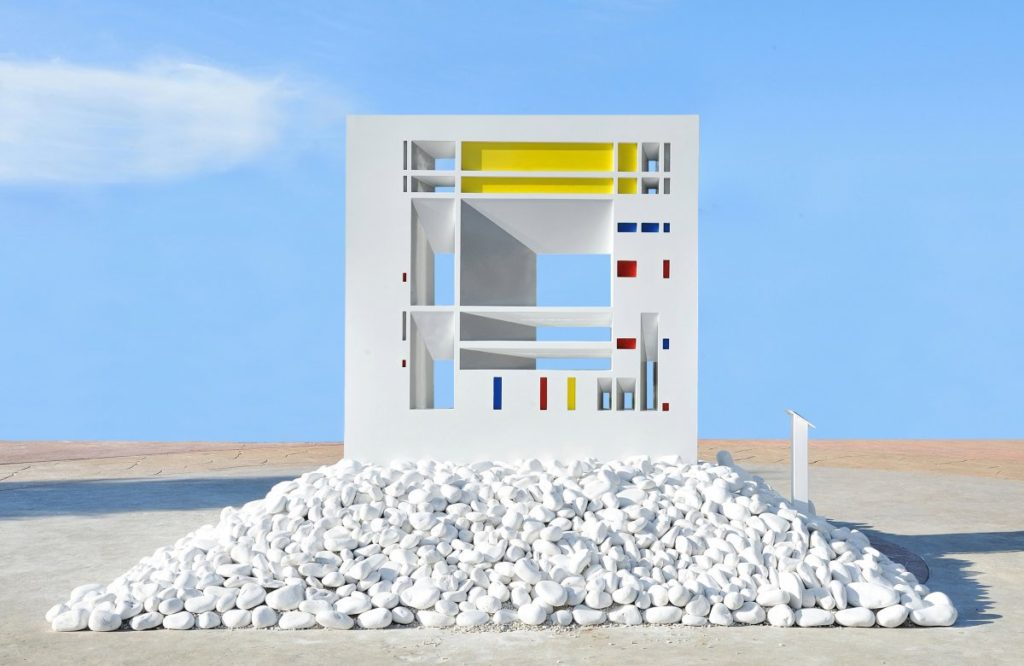 Their size goes from the scale model to continuous and potentially infinite duplications in which the space widens towards the opposite direction of the vanishing point, exploding and catching the whole idea of spatiality. They can get to be imagined, and potentially produced, on a scale large enough to ideally constitute the urban plan of a district in which these solid blocks come to talk to each other as the facades of buildings on the thread of the holy. 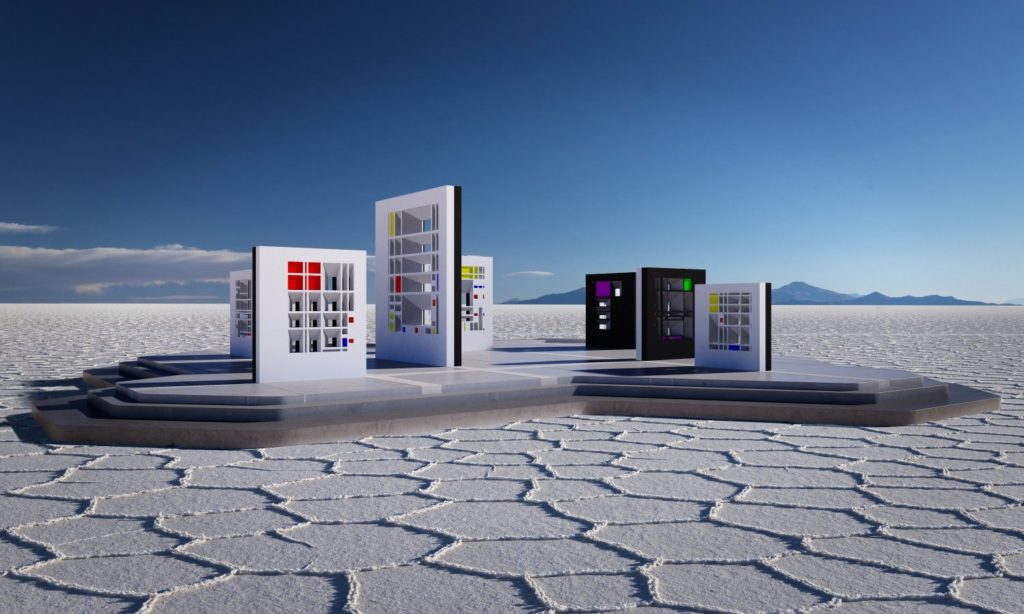 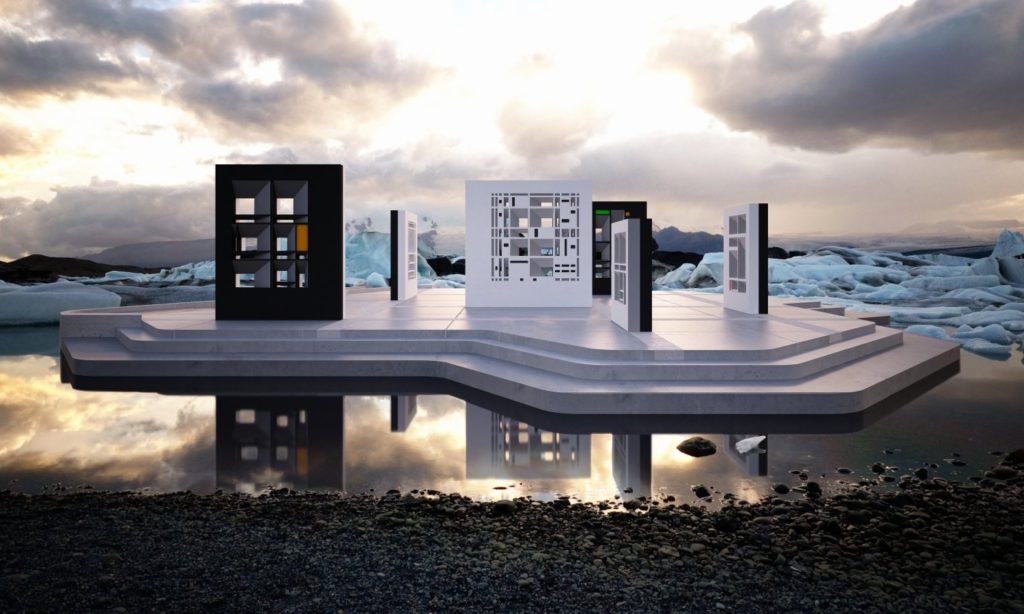 In fact, the term itself “monolith” that Francesco Visalli gives to his large sculptures, leads to the idea of the ancestral religions, of the ancient need to represent with large solid blocks an universal order to which head towards with hope and mystical intentions. The “Standing Stones” (so far conceived only in terms of graphics), are 3-D renderings that bring to mind Stonehenge, the idea of a mythical society, the taste of the legend, the physical construction of a large solid vocabulary built in order to find a direct dialogue with God. A dialogue so majestic as simple as they are all the prayers, and created by basic elements: the stones of the earliest civilizations, yesterday; the Visalli’s Mondrian-inspired monoliths, today. 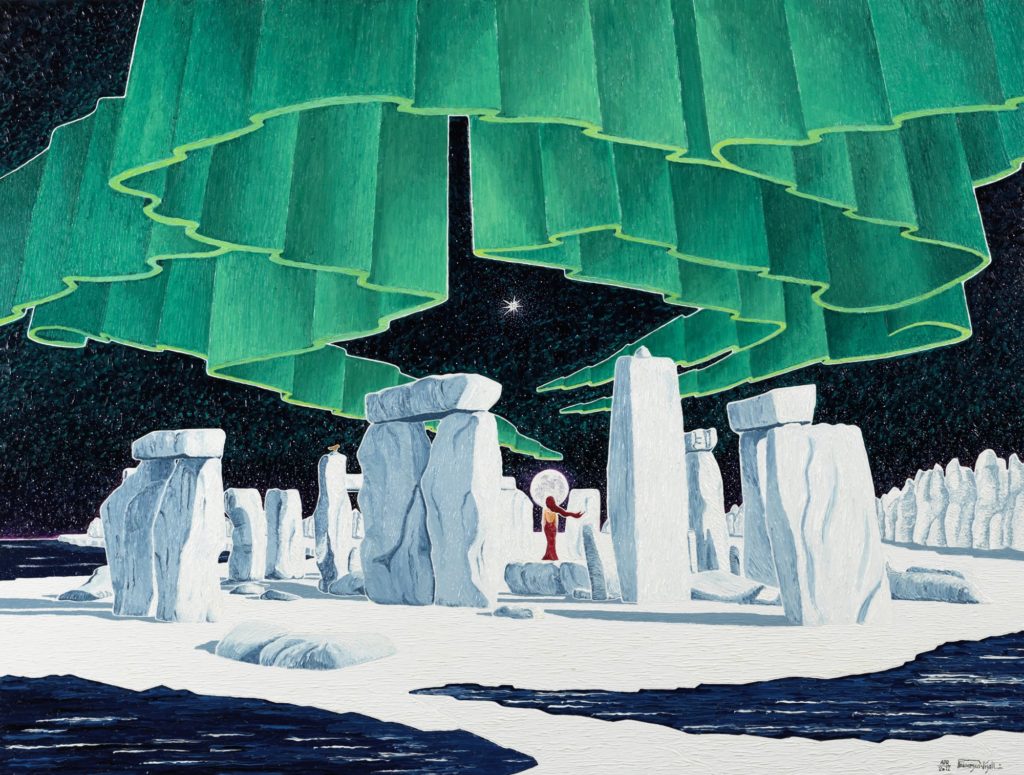 Of course, on both visual and intentional levels, Francesco Visalli’s sculptures are not an unicum detached from any other contemporary experience. On the contrary, they are connected to the great school of the American minimalist sculpture, not coincidentally developed by artists who came from the field of architecture, like him. It’s the case, for instance, of Tony Smith who after having worked in the studio of Frank Lloyd, judged buildings too precarious and too vulnerable and decided to devote himself to sculpture. 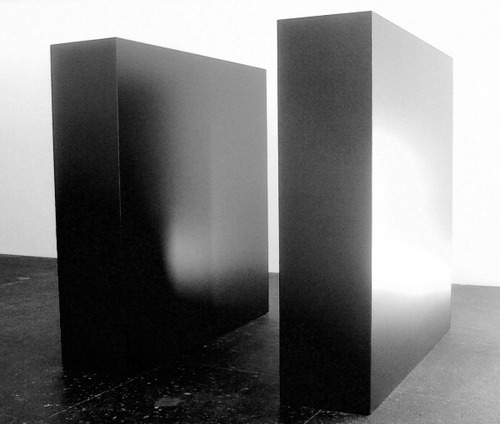 TONY SMITH the elevens ar up

His works were minimalist, made by very simple forms, rectangular shapes that were like agglomerates of single boxes or containers. In general, the American minimalist sculpture reasons in a tidy, modular way. 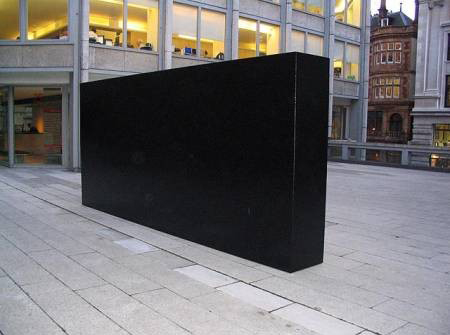 Just think about Donald Judd with his overlapping of rectangular shapes or about Sol LeWitt with his variations on the theme made by open and closed cubes, absolutely regular, suggesting the idea of segments of an orderly system that could be extremely replicated and magnified up to including the whole world. 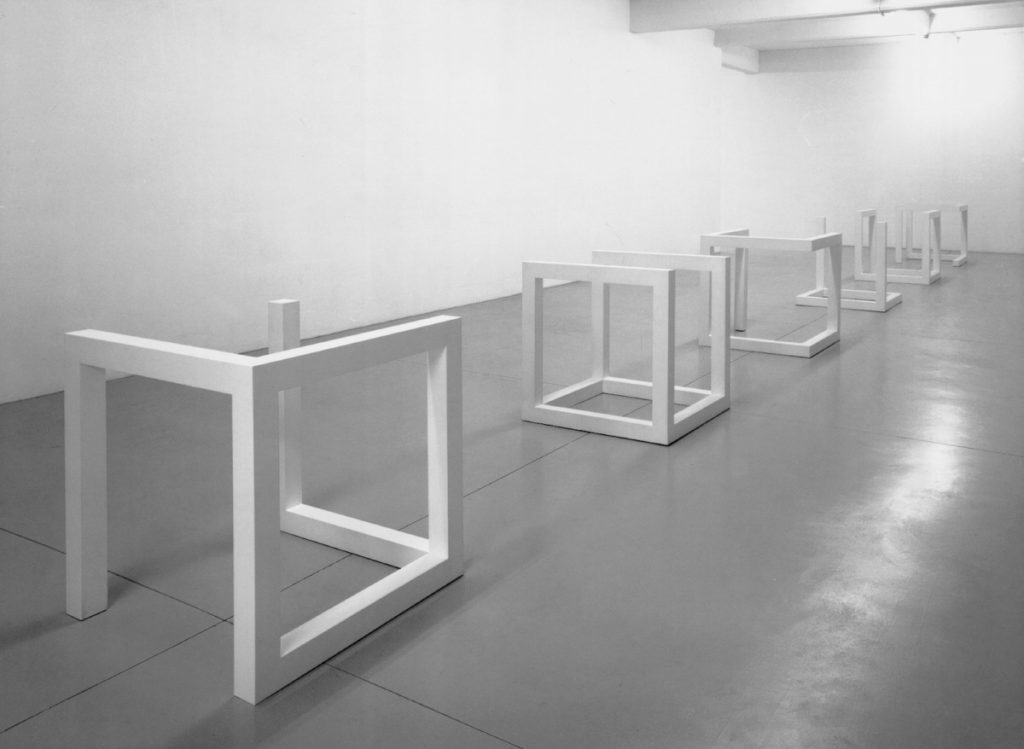 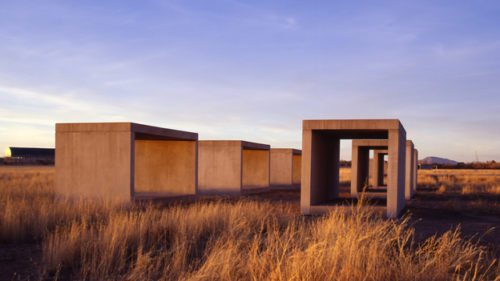 While, among European artists, an interesting work about the boundary between painting and sculpture in relation to the environment is the one by Daniel Buren. Almost all of his works are rigorously site-specific, act directly on the architectural structures, especially those with a specific institutional and cultural role such as museums. Here, through colored, vertical stripes, the space is modified and highlighted, forcing the audience to focus its attention. Visalli’s work is very close to this last experience in particular, which is in certain sense deeper than the researches of the North-American sculptors. The today’s direction of Visalli is, indeed, to use his sculptures as environmental signs and symbols. 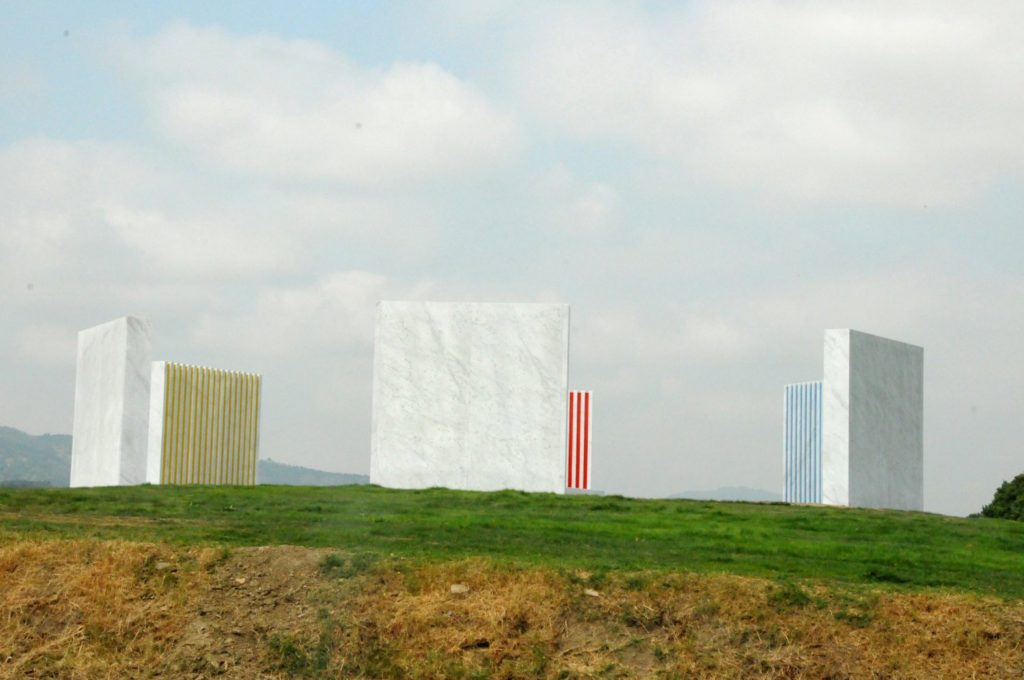 On one hand, Francesco Visalli realizes a re-enactment of an instinctive, archaic dialogue by enlarging the basic forms of his own culture; on the other, he develops a speech addressed to the society by means of public art interventions. The artwork not only moves out from the wall to gain a third dimension, but is also moved out from  galleries and museum, becoming a living monument. 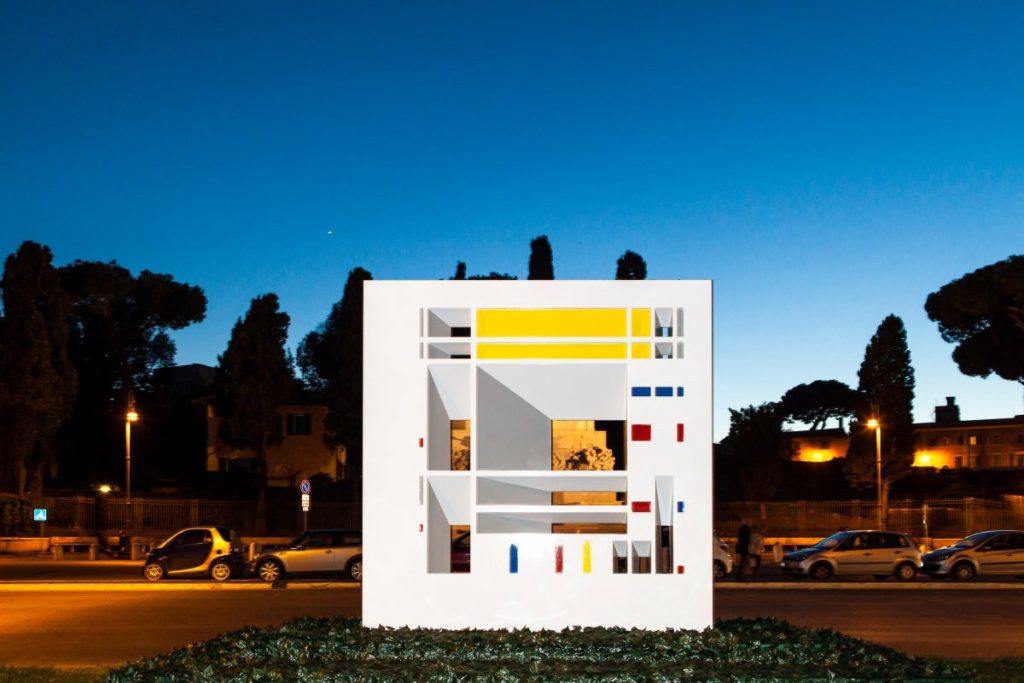 The artist’s idea is, indeed, to realize monoliths standing in the squares and in front of the museums of various cities in order to build a relationship between the audience and the work. This should be aimed to create a sense of displacement due to the repurposing in a three-dimensional giant-scale a very well-known work, as precisely the paintings by Mondrian. It makes audiences wonder how much is important the question of the spatiality in art, what is the real difference between the pictorial and the sculptural levels, if contemporary art works have a their own “livability” even when they may not be moved out from the institutions, monumentalized and used as a part of the urban fabric. So, Francesco Visalli’s work tends to show that art is always potentially a living structure that builds the society and, at the same time, derives from the people. An intellectual cell of a “political” intellectualism in the widest sense as possible: a human effort towards the construction of the world, toward the fellow man, toward the idea itself of humanity and of idealism in history. 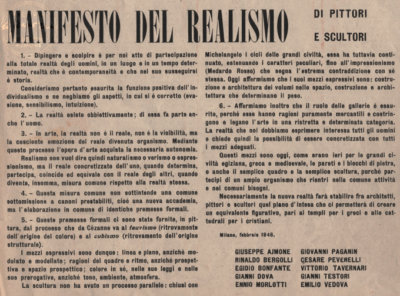