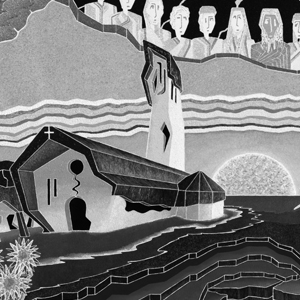 “Man basically loves that which most reminds him of these almost subconscious visions, these visions which are his secret world, unknown to others and which no one can take away from him, because he keeps this world in his brain”.

There are some men whose most cherished landscapes belong to an imaginary nature. Temperamentally driven towards dreaming (with their eyes open), they often lose themselves in it to find vital footholds, which are as salutary as they are stimulating. The reality, for this privileged kind of individual, is merely a rigid convention: a closed perimeter like the walls of a prison from where they can guess what lies beyond.

Until a little while ago, out of ignorance, I knew nothing of the work of Francesco Visalli. Then, a most valued, sensitive and enlightened friend, Luana Baraccani, presented me with an opportunity to fill this lamentable gap – a series of reproductions that instantly expressed the merits of paintings which, amongst other virtues, possess one in particular: namely, that they are originals.

Despite having always been wary of impressions derived from photos or modern digital devices – painting demands another type of visual contact, real and direct – I was immediately persuaded by those partial references I had seen to look further into the work of Visalli – a solitary, noble figure in a contemporary landscape where, sadly, other and certainly less talented figures tend to shine.

Having got past the intriguing impact of their surface, the canvasses, ably brought to fruition by a painter who does not lack certain brave expressive audacities, show places that are not places and men who are not men. One might say instead that, after looking at them in sufficient depth, one sees dimensions and beings that live in the mind of an artist whose most urgent need is to transfer them using exquisitely allusive perspective. Those accentuated forms, alien to any type of geographical or physiognomic connotation, indeed are home to illusions and waste that evoke a hidden existence both present and past – that of Visalli.

The depiction is an echo of cavernous personal tremblings, by establishing an iconographic mirage that appears almost therapeutic: it manifests itself in the richness of transfigured symbols, scenes inhabited by legends and archetypes, with the presence of an aura to pacify intimate troubles or awaken dreamy abandonments.

Even a rapid examination of the last century of art fails to produce any legitimate lineage. They bring together, naturally, in a creative figure characterised by an obviously imaginative ability, the fertile seeds of a surrealist season meritoriously treated by Visalli in the right measure, without, that is, those cloying adhesions, at times even symmetrical, that lead to the dangerous abyss of epigonism.

In this sense, it is worth pointing out some other noble connections from further back in time, which, as hazy as they might be, nevertheless reverberate with reflections of the fourteenth and fifteenth centuries, evoking, first, the distinguished examples of Paolo Uccello and Piero della Francesca and then, Duccio di Buoninsegna and Simone Martini.

An example: L’alba di Madame Chisciotte (Madame Quixote’s Dawn) – doesn’t this work contain a faint suggestion, perhaps even unknowingly, originating from Guidoriccio da Fogliano by the incomparable Simone Martini? Visalli is a cultured man. He has travelled, lived and read.

From the sum total of his experiences, human and spiritual, flows the sound philosophical substratum that gives each of his works a particular light. A visionary painter, who nevertheless loves to enrich every painting with an arcane existential flavour, a mixture of distinct fragrances: the sour and the sweet combine to give birth to a continuous feeling of alienation that comes to those who look at his paintings in spellbound astonishment.

These remain and reaffirm themselves, moreover, as pictorial settings full of unanswered questions and, at the same time, established facts, as is appropriate for those who are inclined, by nature, to constantly question themselves and spare nothing in the difficult and endless pursuit for what constitutes the ultimate truth.

This is the goal. Painting, therefore, means exploring unstable mental equilibriums, precarious human relationships and what remains in the soul – and why – as a perennially flourishing recollection, capable of conditioning to such an extent – for good or for bad – the present and the future of a man. From Diogenes to Freud, with Nietzsche and Schopenhauer along the way, the interludes with which Visalli’s extensive intellectual journey is peppered are therefore varied and recurrent.

As a young man, Giorgio de Chirico once wrote: “We are travellers always ready for new departures”. However, for Odysseus, Ithaca is far away and his return is hindered by all sorts of obstacles. Visalli knows them and knows what peaks, seas, arid lands, tempests and perils need to be overcome in order just to imagine the sun behind the mountain.

He feeds off the strong roots of his dream and his is a way of painting in which so many indelible scars have undoubtedly hardened, but where the warmth of the sun’s rays have also opened up the threshold for what were to become his new days.

Finally, it is dear to me to think, flitting around with my imagination, that, although those anthropomorphic beings – that’s how I labelled them earlier – are seductively calling us to do, he has finally found his chosen home on the perfect Easter Island, different from Rapa Nui, where the gigantic Moai, all facing in the same direction, know the hidden secrets of the world and in the evening they divulge them whispering to those who like Visalli, have a heart and ears to listen to them.