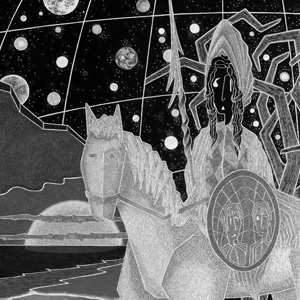 The subject awakens in the mind the image of Easter Island’s gigantic and mysterious Moai. That, however, is nothing but one remote reference within a vision inhabited by a multitude of ramifications: striking, amongst others, is the allegorical contrast between the human figures called to take on the role of spectators and the anthropomorphic sculptures.

The visionary source that characterises a work of this type manifests itself with considerable force in the original invention of the spaces and, in particular, of what appears to us as an unusual precipice. The conundrum is – where is the treasure? Does it truly exist? Moreover, to what visual field does it belong?

The theme gives us a first hint of the faces that we will encounter in two slightly later works: Doppiezza (Duplicity) and Anima Gemella (Twin Soul). 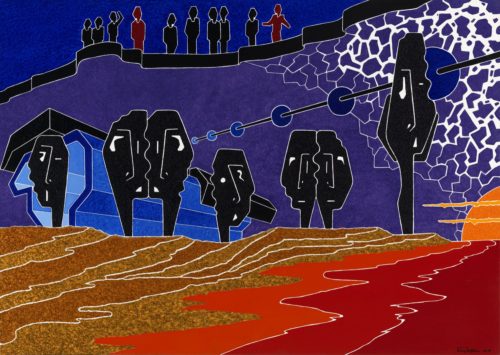 The blue that builds, with impressive transparencies, an explicitly mental “refuge” does not manage to relieve the depths of the loneliness that this image evokes. There is black in abundance: it even swamps the face of the man seated at the table. The glass of red wine in the foreground nevertheless helps to give hope: an arcane glow in the eye of the main character externalises the expectation – which germinates from dreams – regarding the future.

The painting indulges in eloquent reflections of memory: the evanescent character reverberates within the plastic tendency of the composition. The brushstrokes, like a surgical incision one might say, define the features of the figure, as well as the objects that surround it, all crystallised in surreal geometrical solidness. 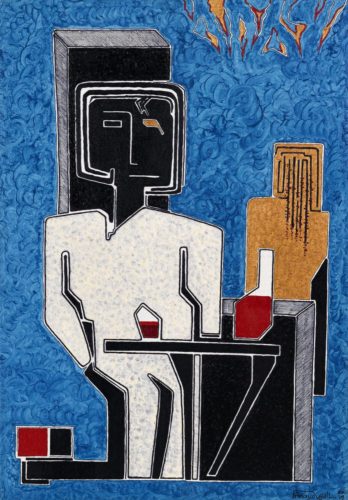 Although the title does not explain it clearly, the work is nevertheless, from a first cursory viewing, as complex as it is profoundly enigmatic. In the peculiar architectonic construction of the image there persist, in fact, in equal measure, allusive dichotomies and similarities of a clearly inner reality. We do not fully know to what extent these spirits are truly kindred or, whether, perhaps in one as in the other, there lies the subconscious desire to establish something which is only a yearned for relationship. In the meantime, what does appear and quickly becomes part of the other themes, is a new and challenging question: Anima gemella (Twin Soul) or Io e il suo doppio The Self and its Double)? What is emblematic, in this sense, is the hermetic presence of “fragmentations” and “migrations” that are suspended, like waste, on a background where the rectangle of a window appears symbolically.

One recalls Fellini, his fertile imagination, his fascination with equally visionary journeys and settings. Visalli leads us by the hand along a staircase that symbolises the difficult existential journey. Lining the imaginary way are the women who have accompanied him at different times.

On the left, yet another level, jagged edged like his soul, where the ashes of memories and the dusts of time that has passed now lie. In the distance is the final destination that awaits the intrepid traveller, with the streamer rainbow, testimony to what is now a storm long gone.

The story told by the painting: intense, highly imaginative, yet evocative of facts that belong to an autobiographical experience. Amidst the colours, the shadows and lights that have followed one after the other in life at irregular intervals. 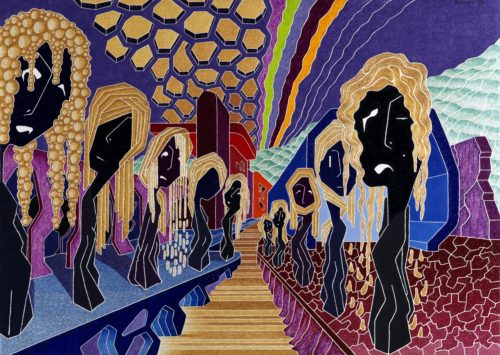 Yet another figure that appears to emerge from of the kaleidoscope of memory or, who knows, everyday life. It is easy and at the same time superficial, to instantly draw attention to the Cubist and Futurist influences that innervate the portrait’s skeleton. But there is, on the contrary, so much more in this icon of contemporaneity, “forced” to stand naked before a sort of potential mirror. The work of an artist that is capable of giving concrete form, through his painting, to intimate needs or distant fears, the ultimate outcomes of dark psychological events. What emerges, in the spaces circumscribed in white, in the no man’s land of the spirit where truth devours the false like miseries and contradictions, is precisely a scornful and, at times, even useless duplicity, which is also no longer required in that process of social integration that made it so important to appear rather than be. 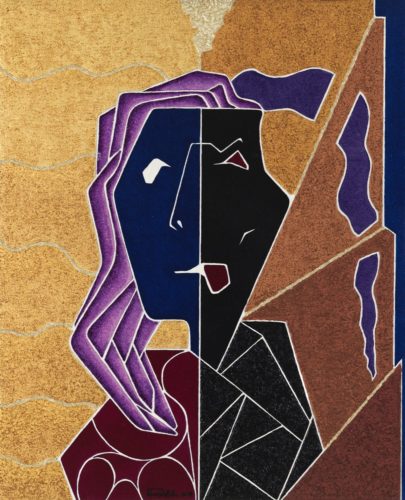 A landscape of the soul, leaden like certain memories yet, at the same time, intoxicated with warm illuminations. The description of nature – above all the felled tree trunks – transfigures the idea of scars that will never fade. The ground gives way under foot, whilst muddy turbid waters surround and swamp the inside of a church. A bolt of lightning slashes the black backcloth of the night sky. Thirteen ghosts appear that remind us of the puzzle of the apostles gathered together for the last supper. But in this case, who is the intruder?

In the meantime, beyond the rocks, the cyclopean shape of a woman appears, like a sudden inspiration, on the brink of a bridge – between a distant and so very different before and after – revisited in the long trail of a curious rainbow.