It was in November 2011 (I am not sure of the exact date) that I went to see an exhibition of works by Piet Mondrian at the Vittoriano Complex in Rome.

Of course, I knew of Mondrian (Pieter Cornelis Mondriaan, 1872-1944), but apart from the many images I’d seen over the years, in magazines, advertisements and other media, I’d never had the chance to see the original works, and, above all, I’d never studied his art.

What struck me initially was the title of the exhibition: “Perfect Harmony”.

I wondered how it was that just a few lines and three colours, arranged in such a rigid, basic way, could produce such a feeling of fluidity and harmony.

The collection of works on show covered nearly all Mondrian’s artistic career.

I was immediately intrigued, not so much by the works themselves, as by a perception of the deep and radical artistic changes (stemming from spiritual changes) which took place during Mondrian’s life. They led him from Realism to pure Abstraction, by way of Symbolism, Luminism and Cubism. This seemed very significant to me. Such an extreme path, involving such radical opposites, like black and white, night and day, life and death, is a form of transformation rarely encountered in human life, let alone among artists.

As I left, I bought the exhibition catalogue, carrying with me this strange feeling of duality moulded into a unique identity. It seemed to me almost divine: like man and woman sharing a single body!  So, this was the perfect harmony I experienced when looking at Mondrian’s abstract work.

Every so often, during the following months, this powerful sensation returned. I would look at the cover of the catalogue, which showed the 1921 work, “Composition with large red plane, yellow, black, grey and blue” and would be aware of the same frisson:  a shot of adrenalin which impelled me to enter the painting, to explore and discover the inner essence of Mondrian.

As has always occurred during my own artistic development, anything that makes a strong impression on me somehow remains preserved over time; so well hidden in some corner of my mind that I nearly forget about it. But then suddenly, almost as if it has completed its gestation period, it explodes like a volcano, bursting out and taking possession of me.

And so, nearly a year on and without knowing why, I found myself putting aside the paintings I was then working on, in order to dedicate myself exclusively, day and night (and this is no exaggeration) to a study of Mondrian’s abstract art.

It has been an unstoppable tsunami, with almost three months of ceaseless work finally leading to the conclusion of the ambitious, mad, foolish project presented here.

I call it ambitious, mad, and foolish also because it has prompted me to make the basic drawings for creating over 340 works (although it could well prove an infinite number). Many of these will be large-scale works, suggested by 47 paintings from Mondrian’s output during his abstract period (around 1917 to 1944).

Even if I wanted to produce just half this number, the rest of my life would not suffice. May God help me!  As I have constantly reiterated, right from the first day when I began my new “artistic” life, I do not consider myself a true painter, let alone an artist, but rather as an instrument in the hands of a mind and spirit to which I give free rein. So it is a blend of pure instinct and passion.

Even less could I describe my work with regard to Mondrian in terms of “Art Criticism”: each to his own trade! In any case, I do not have the essential knowledge and training.

I will therefore limit myself to outlining the route I have taken, trying to find the right words to accurately describe the research I have carried out and its final result.

Click on the images below to view the articles 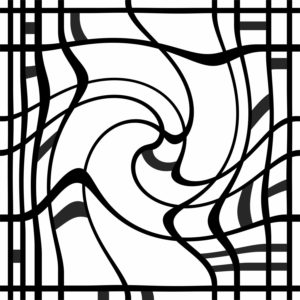 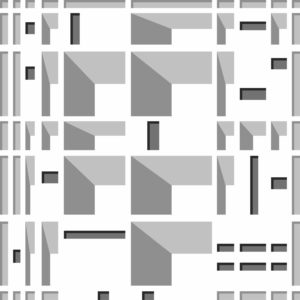 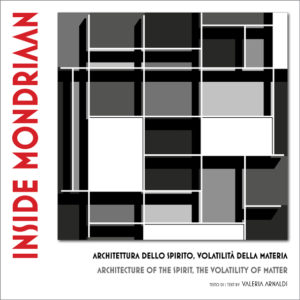 Architecture of the spirit, the volatility of matter – critic text by Valeria Arnaldi 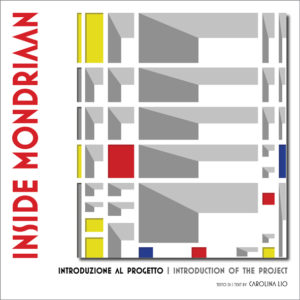 INTRODUCTION OF THE PROJECT – critic text by Carolina Lio 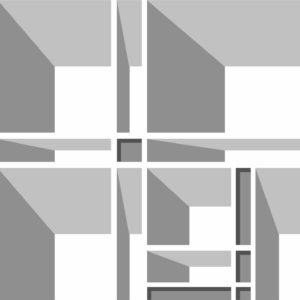 Scale model of the exhibition project